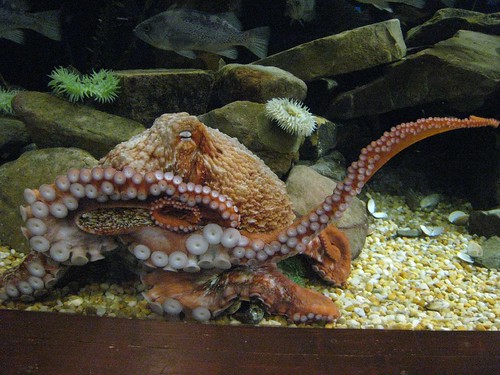 I recently had an email from a woman, whom after a great many years, discovered the octopus was her totem or guide.  She asked for the symbolism of the octopus, and I respond:

Identifying the symbolism of the octopus can be daunting  & not for reasons you’d think.

Namely because the octopus participates in the universe on many different levels.  As such, it’s symbolism is vast and related discussions could potentially last forever.

As if the massive depth of the symbolism wasn’t overwhelming enough – try to getting past the visual effect the octopus has on us.

We look at the octopus and it draws us in wholly.  Mesmerizing & chilling, it’s motions are hypnotizing.  So I’ll start there, the symbolism of the octopus born from it’s sheer physical presence.  The more ethereal symbolism’s deserve an entire book for room to expound, but I have written more about this amazing creature here.

Of its many aspects, here are just a few symbolic meanings of the octopus:

With eight arms, the octopus shares some symbolic meanings with the spider as well as the meanings of number eight.

Observed these eight arms circle out in motion – calling to mind the concept of spiral – this forms a symbolic bond between the octopus and the meanings of the spiral or whirlpool.

Being a creature of the sea, the octopus also shares commonalities with and symbolic meaning of fish.

Adornments like octopus medallions were worn by sailors to ward off evil.  Seamen understood the eerie magic of the octopus.  It’s black ink-jet expulsions and other-worldly appearance struck awe (and terror) in the observer.  Hence, it makes an incredibly powerful totem, carrying great status – a symbol of protection and good luck.

Minoan art depicts the octopus (particularly on bowls or vases) unfurling.  This is thought to be symbolic of the creating and the expanding of the universe.

Other associations of the octopus include:

As a side-note, the octopus is also associated with the Priestess and Moon card in the Tarot deck.

Take the time to research more about the octopus – it will be worth the investment of your time.  Meditate upon the octopus – focus your awareness on this amazing creature.  You will find it an empowering agent for your growth.  Consider yourself blessed.

Poof! You’re a Toad (the dangers of totem-assignment)

9 Comments on “Symbolism of the Octopus”