I’ve always marveled at the symbolic meaning of the uroboros (also spelled ourobouros or ouroboros) and have adopted it as a personal symbol – using it in meditations and incorporating its symbolic meaning into daily thought patterns where a shift is necessary.

I’ve written a bit on the uroboros on my symbolic Alchemy Animals page here, but was prompted to write more after seeing this post by Eksith Rodrigo who describes how to make your own Uroboros on this post.

Using his instructions, I made my own uroboros (shown above).  I added a snaggle tooth & curly horns….I’ve got a thing for horns….but I digress..

The symbolic meaning of the uroboros is replete with concepts such as:

The alchemists illustrate this serpent wrapped around the cosmic egg, signifying the life span of the universe.  Furthermore, the center opening shown in typical uroboros illustrations may also symbolize the egg which speaks of :

This opening upon which the serpent is clenched is also symbolic of the number zero and all it implies.

The serpent itself is symbolic of regeneration and the cycle of time as we observe in the shedding of a snake’s skin.

The eating of it’s own tail declares the statement “The end is the beginning”  and reminds us of the eternal nature of energy which cannot be destroyed, only transformed.

I rather like the implication that only by devouring ourselves can we find our true nature.  To further this point, I think of the constrictive nature of the snakes feeding pattern; its inner muscles press upon prey (in this case, itself).

This makes me think of the birthing  process of diamonds.  It takes a lot of pressure to make a diamond from coal.  Likewise, it takes a lot of constriction for our best selves to be squeezed out of our false identities.

The overwhelming message the uroboros provides is “all is one” – the concept of connection and the totality of all.  Other thoughts that come to mind with the uroboros include:

No doubt, this symbol is a powerful one – we can easily see how all of its symbolic implications can reap a dramatic effect on our thoughts.  I invite you to settle in with your own personal concepts of the uroboros, and see what kind of transformations come up for you! 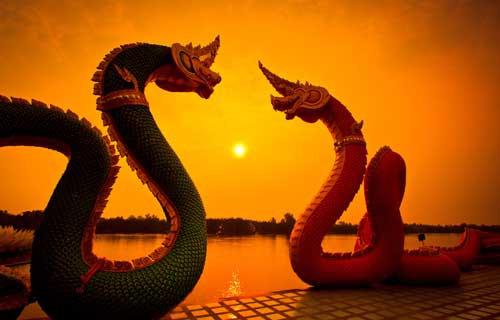 The Saga of Naga Meaning

15 Comments on “Symbolic Meaning of Uroboros”