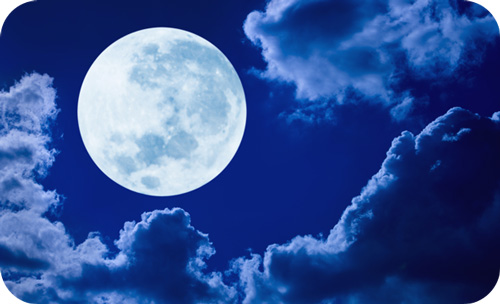 Why Do We Call It A ‘Blue Moon’?
Symbolic Meaning of Blue Moons

At the time of this writing a blue moon is approaching tonight, May 21, 2016.  What’s up with that?  What’s does the blue moon mean?  Plenty.

Let’s start by explaining what a blue moon is.  Basically, there are normally three moons in a season.  Every couple years an extra moon crops up.  Hence the cliché “once in a blue moon” akin to describing a rare event.

Pretty simple explanation, right?  But what’s up with the colorful moniker? Why do we call it a blue moon?  Why not “weird extra moon”?

I mean, blue moons aren’t even blue all the time.  They can be any color.  The hue of this moon comes into play as an effort to identify an anomaly.  Why? I’ll explain.

As par with all assignments in symbolism – it’s hard to pinpoint an exact origin.  The term “blue moon” crops up in lots of places during different eras.

It’s widely agreed blue moon is a term of the Old Ways.  It started with those savvy country folk who lived and died by the rule of Nature.  In ancient Gaelic, the word blue identified the color, but it also had dodgy connotations.  In Gaelic slang, the word blue was used to express indecency or inappropriateness. In old French, blue signified a low mood.  Hence the phrase “I’m feeling blue”.

If we pull on this blue thread, we might wonder why dub an extra oddball moon as a bad thing?  Pretty simple answer.  Country folk of the Old Ways were profoundly connected to the earth.  When I say they lived and died by the rule of Nature, that is oh-so-true.  From crops to cows, cures to ceremony – earth and sky was the source of it all.  So what’s the blue moon connection? An extra moon in a growing season can do some really wonky things to everything.  It affects human behavior, animal behavior, and it certainly influences growth of crops/plant-life.  Full moons pack powerful punches once a month.  But twice a month – whoa Nellie!!  Stand back for a walloping effect.  Ergo, this renegade extra moon became known as the ‘indecent moon’ or ‘inappropriate moon’.  Basically it was an unwanted moon because to ancient country folk, it wreaked unpredictable results in life.

So that’s the winding road to answer the question “why do we call it a blue moon?”  But I can’t leave it at that.  I have this compulsion to turn frowns upside down.  What if we flip this bad blue moon rap into a better perspective?

We can look to the same ancient folklore that gave the blue moon its indecent proposal from the beginning.  The Old Ways tell of amazing results when we appeal to the power of the blue moon.  Whoa?  Yeah! Instead of getting freaked out over the unknown influence of this moon – we can harness its power – purposefully and profoundly.

This rare’ish lunar event is a perfect time to get serious about our affirmations.  When we solidify our intentions during a blue moon, this moon blesses it in a big way.  Think of it like sowing super-sonic powerful seeds in our lives.  Then consider the blue moon adding magic lunar juju to our seeds – insuring the likelihood of successful sprouting of our dreams.

In short: Offer up your dreams and expectations for the future to this blue moon.  Connect with Dame Bleue Lune on a personal level.  Envision this dynamic, cerulean Lady Luna as a giver of second chances and big gifts in your life.

Blue moons have historically proven themselves to be catalysts for mind-blowing life-events.  Don’t miss the chance to utilize this thin slice of night life.  It’s time to boogie in the moon light and dare to dream for your best future.

Interestingly, the Old Ways document a domino effect with this action.  If you engage the blue moon to aid you in your future manifestations, it will set factors in motion that will last until the next blue moon – which is about three years in the future.  Considering this is a time of impressive influence, energy and potential – it behooves us to choose our wishes for the future wisely.

I hope this post on “Why do we call it a blue moon?” was illuminating.  At very least, I’d like to think this post inspires you to wander outside and simply appreciate the bountiful beauty of this blue moon (even though it likely won’t be blue).  If you do go lunar-watching, do me a favor.  Just give thanks.  Thanks for the little things, big things, and everything in between.  But especially give gratitude for this glorious universe in which we live.

As always, my thanks to YOU for reading!

Click the links below for more symbolic meaning of moons…